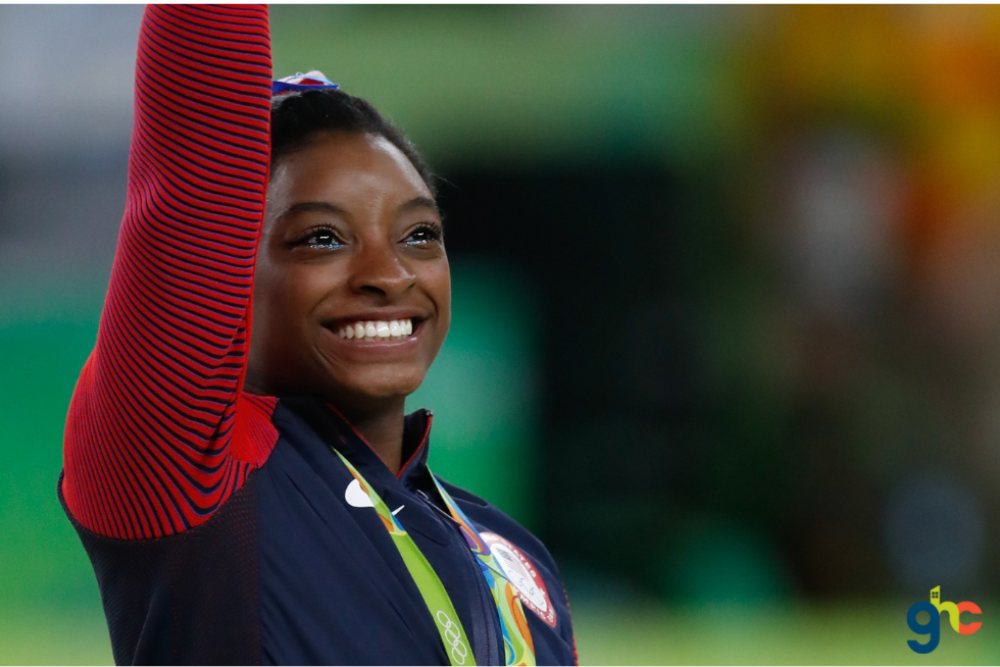 Simone Biles, born in 1997 in Columbus, Ohio, is currently the most highly decorated gymnast. She has over 25 medals, both Olympic and World Championship, making her an Olympic record-breaker in USA gymnastics. But who is she?

Simone Biles and Her Humble Beginnings

Not unlike many children around the country today, Simone Biles and her siblings, Adria, Tevin, and Ashley were victims of their mother’s drug addiction. The four were in and out of foster care several times, leading to their grandparents, Ron and Nellie, taking them in. In 2003, the couple adopted Simone and Adria, who were the youngest, and Ron’s sister Harriet adopted the oldest two. Simone proudly calls Nellie “Mom” and speaks about how encouraging and uplifting she is.

The fact that she was a child prodigy became apparent when Simone’s daycare class visited a local gymnastics center. Simone recalls imitating what she saw the gymnasts doing while she was there, and the coach immediately took notice, sending a letter home with her asking that she be allowed to join their organization. This is where her own natural gifts became honed and developed, and she was on her way to Olympic gold from there.

On a more personal level, Simone stands only four feet, eight inches tall. She enjoys spending time with her friends, shopping, reading, and history. In just a short time, she has become the most decorated medalist female gymnast in history. She has dual citizenship in both the United States and Belize and considers the latter a second home.

Recognizing her competitive spirit and dedication to the sport, her adoptive parents, Ron and Nellie, own and operate a gym in Spring, Texas called World Champions Center (WCC), where Simone trains.

A Notable Timeline for Simone Biles

With so much achievement in such a short time, we will take a look at a year-by-year breakdown of Simone’s achievements.

2007: Started her competition career as a level 8 gymnast.

2011: Took a firm placement as a junior elite, won first place in the vault and balance beam and won third place all around in the American Classic.

2012: A strong year, winning the vault and all-around events in the Secret U.S. Classic, the Alamo Classic, the American Classic, and the Houston National Invitational.

2014: Started the season with a shoulder injury, but won the all-around competitions in both the U.S. and the world. Took the gold medal in the Secret U.S. Classic in balance beam, the vault, the all-around, and floor exercise. This was the year she began to utilize what is now known as her “signature” move, a double-flip with a half-twist.

2015: Assumed the title of the first woman ever to win a three-in-a-row world all-around title. This completed her 10th gold medal in an international competition. This year, she became a top consideration for the Olympics and traveled to Spring, Texas, and the World Champions Centre that her family owns there, in order to train seriously for Rio 2016.

2016: Impressive first place wins in floor exercise, vault, and all-around, earning her an Olympic team placement for 2016, alongside gymnasts Madison Kocian, Aly Raisman, Laurie Hernandez, and Gabby Douglas. Helped the U.S. women’s Olympic team to win gold in August, and went on to win gold in the Olympic women’s all-around individually. Received the gold medal in women’s individual vault, bronze in the individual balance beam, and gold in individual floor exercises. She also published a book called Courage to Soar: A Body in Motion, A Life in Balance, which was co-written with Michelle Burford.

2017: A return to intensive gymnastics training helped solidify her standing at the top.

2018: Took the gold in all events for the U.S. Gymnastics Championships. Not only did she sweep the competition by 6.55 points, but she was also the only woman to ever have claimed five all-around titles nationally.

2019: Completely topped all prior performances by becoming the first-ever athlete to successfully complete a double-double dismount from a balance beam, and the first female successfully to complete a triple-double during floor exercises. This solidified a U.S. nationals win, her sixth, as well as her World Championship fifth gold in individual all-around. This brought her career total of World Championship medal to 25.

Things changed drastically for Simone and her family in 2012, when she was withdrawn from public school for homeschool placement. Because of this academic freedom, she was able to allow 32 hours to her training each week (up from the 20 hours of weekly practice while in public school). This translated into exceptional success for her 2012 gymnastics season.

In an interview with The Undefeated, Simone explained how homeschooling was the only way to move forward in gymnastics. She talked about how hard it was to leave public school for months at a time, so her grandfather decided that a Christian homeschool experience would be best for many reasons. She admits she spent a weekend of turmoil over the decision at the tender age of 13 but resolved that it was the only way to truly get serious about her passion for gymnastics. Over her career, Simone Biles has crushed stereotype after stereotype, and now homeschooling can be added to that list.

In an interview with CBN, she said, “I think God gives every individual something special and mine was talent. So to never take it for granted, which my dad always told me don’t waste God’s gift that He gave you. Because it’s like it’s a once in a lifetime opportunity.”

Her step-grandmother-turned-adoptive-mother encouraged Simone to give herself, along with her career, over to God. She also encouraged her to pray, put things in God’s hands, and let him guide her through it. Simone has continued to give God the glory for her success, speaks about her faith regularly on her social media accounts, and wrote of it in her book “Courage to Soar”. The book was published by one of the most well-known Christian publishers: Zondervan.

She put her faith out front again, when she chose the extremely popular worship song, “Good, Good Father” for her brief competition on Dancing With the Stars in 2017.

Simone has mentioned that she chose Saint Sebastian as her patron saint during her confirmation at St. James the Apostle Catholic Church. She spoke of how this was the saint that many athletes chose to invoke to hasten recovery from injury. Since she was recovering from her own injury at the time, she felt it only natural to make this decision at this very crucial point in her life.

She mentions her Catholic faith in her book but says she didn’t do so as a form of evangelism. Rather, she said, her faith is simply a part of her life, and it only makes sense that it would be incorporated into the book itself.

Her entire secondary education was accomplished through homeschooling, from which she graduated in 2015. Just prior to that, in August of 2014, she made a verbal commitment to UCLA. Her plan, at that time, was to wait until after the 2016 Olympics to enroll and went on to sign a National Letter of Intent with the school. However, she announced her move towards professional gymnastics and forfeited her NCAA eligibility in July 2015. Three years later, she enrolled in the University of the People, a university for which she intends to become a brand ambassador after studying business administration there.

With gymnast Simone Biles in the lead, the U.S. women’s gymnastics team went on to win the gold on August 9, 2016. Her scores were impressive, earning a 15.3 for her balance beam routine, a 15.933 for her vault, and a 15.8 for a floor routine that wowed the crowd. Her signature move, known as “the Biles” helped cement the floor routine lead. The move is made up of a combination double layout and a half twist.

There were more history-making moments during the 2016 Olympics including her monumental lead over Raisman, by a margin of 2.1. She also won Olympic world titles, back to back, in the all-around competition, making her the first female to do so in more than 20 years. After taking the gold again for a magnificent floor performance in an individual floor exercise, and for the individual vault performance, she became one of only three gymnasts in history ever to have been a four-time gold medalist in one Olympic Games.

In December 2015, Simone was the fourth gymnast ever to make the Team USA Female Olympic Athlete of the Year. Exactly one year later, she was named a sponsor for the USS Enterprise, a United States Navy aircraft carrier, one of only two Olympians ever to be given this title.

Named Sportswoman of the Year

Became a finalist for Time’s Person of the Year

Won Best in Sport in the Shorty Awards

Won Laureus World Sports Award for Sportswoman of the Year

Named one of the most influential people in the world (TIME)

Most Dominant Athlete of 2018 (ESPN The Magazine)

Laureus’ Sportswoman of the Year

She also has a long line of sponsorships, which include:

To hear more interesting stories about people you might know, you should attend a Great Homeschool Convention. There, you’ll hear from many featured speakers that have lots of interesting background, experiences, and stories to tell. You can also take part in workshops, meet other homeschooling families, and browse a vast selection of curriculum and resource vendors.