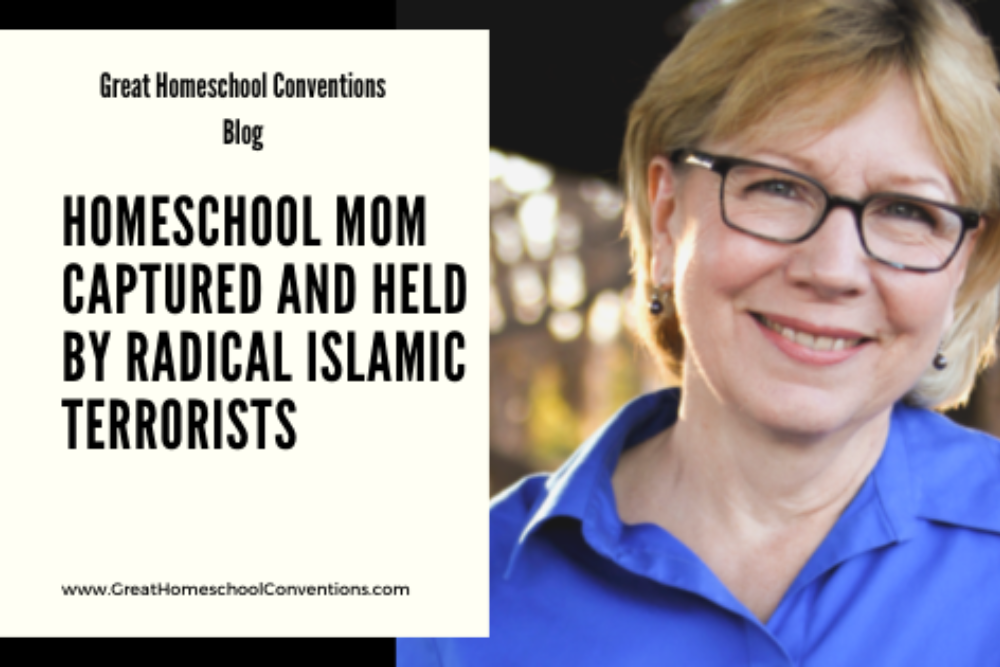 Gracia Burnham is a former Philippines missionary and homeschooling mother who currently resides in Rose Hill, Kansas. She travels the country to tell her gripping and powerful testimony that has inspired so many over the years.

You’ll get to hear that testimony for yourself if you attend any of the seven regional Great Homeschool Conventions in the upcoming year. Gracia will be speaking at all seven conventions to relay her compelling testimony as only she can. Afterward, you’ll get the opportunity to meet her and talk with her for yourself, at which time she is likely to tell you, “the Lord’s mercies are new every morning. Great is His faithfulness.”

Jesus was the center of Gracia’s home as she grew up, and she was singing songs to and about Him long before she could read. At about the age of seven, a Sunday school teacher shared how important it was that she give her life to Jesus and after that, it became a consuming passion for her to be baptized.

Going on to graduate high school and begin classes at Kansas City’s Calvary Bible College, Gracia struck up a friendship with another student named Martin Burnham. His parents, Paul and Oreta Burnham, were Philippine missionaries and he studied aviation which, aside from Gracia, was his greatest interest.

The two were married and after receiving training from the New Tribes Mission, they joined the missionary work themselves in 1986, at which time they moved to the Philippines. Over the next seventeen years, Martin worked as a pilot throughout the jungle, doing a great work that included deliveries, medical transport, and encouragement for fellow missionaries. During this time, their three children were born, and Gracia homeschooled all three there in their Philippine home.

It was May 27, 2001, when Gracia and Martin set aside some time to celebrate their 18th wedding anniversary off the Palawan Island at Dos Palmas Resort. During what should have been a peaceful celebration of life, love, and joy in serving the Lord, a group of radical Islamic terrorists descended on the resort, taking the Burnhams and several other resort guests captive. They were then taken to a stronghold on an outlying island. Some of those who had been captured were killed there, while others were set free.

Six months later, Martin, Gracia, and one other captive remained, suffering the hardships of constant movement throughout the jungle, in nearly unlivable conditions. They were eyewitnesses to some of the most atrocious horrors they could ever have imagined at the hands of their terrorist captors.

More than a year after their abduction, a group of Philippine military personnel attempted to rescue the remaining three hostages. Their story had been brought to new levels of national attention which renewed a fervor within the Philippine government to find and rescue the couple and the other prisoner with them.

It was during the gunfight that ensued that Martin was fatally wounded. Gracia was also wounded, suffering a gunshot wound through the leg, but she was rescued, brought home to the United States and reunited with her three children.

Attempting to assume a level of normalcy in her life and the lives of her children, Gracia wrote a book entitled In the Presence of My Enemies (Tyndale House Publishers, 2003) in which she recounts and preserves the legacy of her husband’s faith.

Gracia and Martin’s hostage story has been recounted in a variety of made-for-television specials including one on National Geographic and one on The History Channel. Loved for her powerful and inspiring testimony, Gracia speaks often at schools, conferences, and churches all over the United States.

You will have the opportunity to hear her speak for yourself by attending one of our seven regional Great Homeschool Conventions. Check out our schedule HERE. For locations and further information, please click the links below:

Remember that our seven Great Homeschool Conventions are Regional conventions. That means they aren’t just for those in the state in which they’re being held. Just pick the one closest to you!

Here are some of the things we offer for those attending our conventions:

Be sure to register early to save $10. We look forward to seeing you there!