Beware of Electronic Devices When Homeschooling

Beware of Electronic Devices When Homeschooling 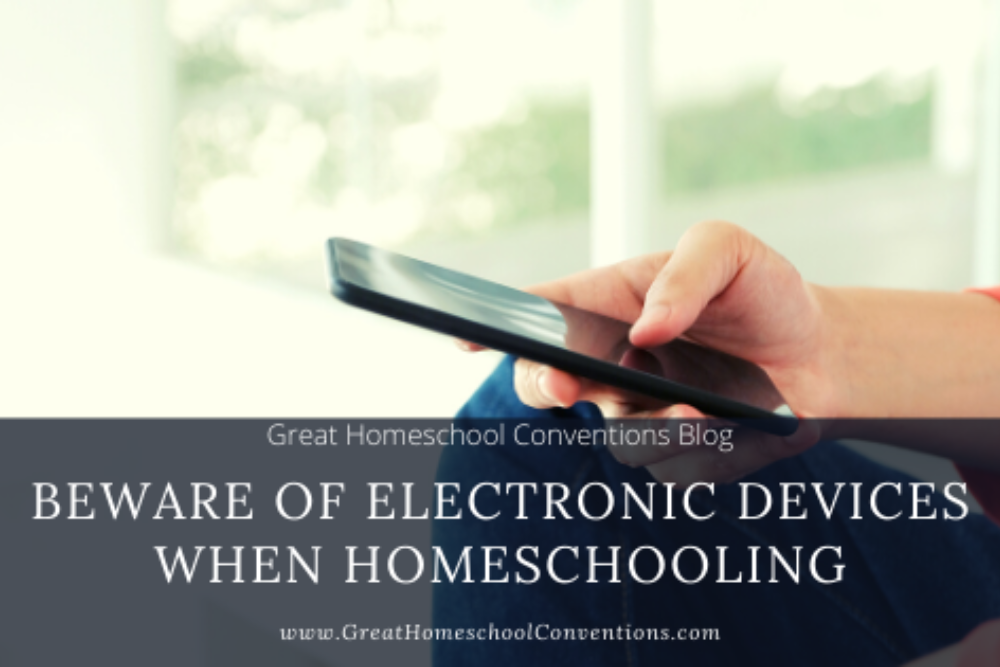 Many pros and cons come up when considering electronic devices and what role they should play in your homeschooling style. Some agree that they “have their place” and can be used during school hours with no problems at all. Others staunchly oppose the idea, opting for classical methods of academic instruction instead. The issue then becomes, Do we use them or not? And if so, to what extent?

Those are a couple of the questions I hope to help you find answers to as we go over some information together.

Disadvantages of Mixing Homeschool and Devices

We live in a day and age that sees the constant overuse of electronic devices. Many children who can barely read now have smartphones with access to spaces they should never have access to. We’ve seen such wicked and deadly games such as MoMo, for example, that targets young children by encouraging them to text a number on WhatsApp, which then sends them instructions to complete a series of increasingly bizarre and dangerous tasks from watching a horror movie to eating Tide-Pods and engaging in self-harm - even to taking their own lives! If you’re not extremely watchful, these things can show up in your child’s devices long before you know it.

The joke has been made, in certain circles, that the “zombie apocalypse” has already begun. You see it every day, on sidewalks, grocery stores, malls, and homes: children and young adults walking around, heads down, thumbs flying a mile a minute. This is hard to watch for those of us who remember running and playing outside, riding bikes, playing marbles, drinking water from the garden hose, and trying to make sure we made it home before the streetlights came on. These days, I am reminded of a quote taken from a stage rendition of George Orwell’s 1949 novel entitled 1984:

“The people will not revolt. They will not look up from their screens long enough to notice what’s happening.”

The Danger of Trading “Real Life” for “Screen Life”

Children today do not get nearly enough time to play, let alone study, have real conversations, or even sleep. In fact, sleep deprivation may now be one of the leading causes of problems in children as young as five years, thanks to screen usage, e.g. smartphones, gaming devices, computers, laptops, and televisions.

In order to combat some of the ill-effects being seen in young children, the American Academy of Pediatrics offers recommendations that include limiting children 18 months old or younger only to video chatting. For children two to five years of age, restrictions of one hour each day, of high-quality content, should be enforced. For children older than six, they suggest limits on any media devices, making sure that sleep, physical movement, and other good health practices take precedence.

A study conducted by the Cincinnati Children’s Hospital Medical Center found some disturbing facts about children who overuse electronic devices. For instance, changes in the white matter of their brains were noted, affecting both self-regulation and language abilities. Children need the kinds of interactions that come with literal face to face communication in order to reach benchmarks in social skills, language ability, emotional well-being, and developed levels of understanding.

If you have any doubts as to whether electronic device addiction is a “thing”, just try taking away a device from a child who is obsessed with using theirs. You’ll see many of the same behaviors that accompany any kind of addiction. Even young adults who admit that their devices aren’t exactly “good” for them experience serious withdrawal if they don’t have access to their screens. Some may become extremely emotional, even violent.

When screen time reaches the addictive stage, it’s bad news for the homeschool environment as it begins to interfere with independent study and work, hobbies, volunteer opportunities, and more. If you find your child or teenager has this problem, consider discussing “fasting” from the device for a certain period of time. If this is undertaken in the right frame of mind, a great deal of freedom could actually result.

Alienation Due to Electronic Devices

It’s easy for children to fall prey to the mind-numbing effects of electronic devices if they are not taught early that there are far more interesting things in real life. Those children who are allowed to interact with their devices at their leisure are often extremely alienated from family and friends. For instance, an addiction to YouTube, online games, or some other form of social media, creates a great chasm between what they want to do and what they should be doing.

They may even realize that they aren’t doing anything particularly useful. In truth, for some children, electronic devices are used as a means of escape. Children who have experienced trauma such as abuse, divorce, or even bullying, often find solace in the “numbing” effect of becoming so engrossed in a screen that they can tune out the outside world.

Even for those that don’t fit into that category, alienation can still be a massive side effect of too much screen use. The only way to combat it is to catch it early enough to exercise your parental rights and restrict usage.

Even if your child is a “good kid”, Satan is no respecter of persons and is a past-master at luring vulnerable young hearts and minds into sin. Online pornography, for example, is available in some of the most unbelievable places, and it only gets worse every day. Online video streaming services such as Netflix, Hulu, and Amazon all offer a nearly unlimited number of programs featuring sex scenes, nudity, same-sex relationships, and many other sinful situations, with no cap or age restrictions in place automatically.

These same streaming services offer programs extolling Godlessness, drug use, alcoholism, the glorification of mental illness… the list is nearly inexhaustible. The more these types of scenes are haphazardly placed in front of the eyes of our young people, the more “used to it” they will become. At some point, these sins will seem so commonplace, they hardly even seem wrong anymore, which can then lead to their actually trying some of the things that now seem so commonplace.

Another reason electronic devices make it so much easier to sin is that it’s easier to interact and engage when there is a perceived degree of anonymity. A good majority of people will say just about anything online because they know they won’t be face to face with the people they’re speaking to. Just a few taps on the keyboard and that intense desire to speak your mind can be satisfied. However, we must teach these very precious words found in Proverbs 10:19 - “In the multitude of words there wanteth not sin: but he that refraineth his lips is wise.” Or, consider this from Psalm 101: “I will set no wicked thing before mine eyes: I hate the work of them that turn aside; it shall not cleave to me.” (vs. 3)

As I mentioned earlier, sometimes, devices can be helpful tools in certain subjects and lessons in the homeschool setting. Other times, they can actually impede the learning process, and cause children to forget things they’ve already learned. Handwriting is a good example. Typing is a wonderful skill, but depending solely on a keyboard can drive out the ability to create fine, legible handwriting that is quickly becoming a vanishing art. The same is true for allowing the use of a calculator in place of actually working out a math problem, or pulling out a device to check the time instead of learning how to read the hands of a clock. What will our next generation look like if they cannot read or write cursively, work a math problem in longhand form or, dare I think it, tell time? That is a frightening potential.

Excessive Use of Electronics and Bad Health

The first thing that comes to mind when you think about screen time and health is “bad eyesight”. However, overusing electronic devices can do so much more than that. In my own daughter’s usage of screens and handheld gaming devices, I find myself constantly calling her out for poor posture. This is a very common threat, as are sleep issues created from too much exposure to blue light, stiff muscles in the neck and back, and blurry vision.

Hearing is certainly not left out of the equation either. With the use of headphones and earbuds, the risk of eardrum damage, some of which can be irreversible, can occur when the volume is too loud. Furthermore, this damage, as any audiologist will tell you, is cumulative. Earbuds, in particular, can also cause excessive buildup of earwax, as the ear canal is blocked and has no way to drain, creating a mimicked resemblance to hearing loss.

Mental health can also be drastically affected if your child winds up in a situation where cyberbullying or inappropriate conduct is the rule of the day. As mentioned earlier, with the age of attempted suicides showing up in the early teen years, we must conclude that these online atmospheres are a breeding ground for these kinds of thoughts and their actions. In fact, I lost a thirteen-year-old cousin not that long ago to suicide as a result of this type of bullying. It’s real, and it MUST be combatted.

Don’t Be a Hypocrite

If you’re planning on doing something now about your child’s electronic device usage, good for you! There’s only one way to deal with the overuse of these screens, and that is to simply buckle down and do what you have to do. You’re the parent-teacher and this issue is as much a part of your child’s education as any other discipline. You can certainly spend some time talking about the situation, but you must follow up with some reasonable actions to make it all worthwhile.

However, during the process of teaching your children to become less dependent on their screens, you must also be willing to spend less time on your own. It’s true that adults have more pressing issues such as work and family matters that can make screen usage absolutely necessary, but don’t spend too much time on your screen. If you’re telling your child to take a break every so often, to leave the screen in a specific place and go do something else, or some other form of separation from the device, then model that same behavior in your own actions as well. Lead them in the right direction by showing them how it’s done.

If you’re having a hard time creating the right balance between the homeschooling environment and the usage of electronic devices, you might find some valuable insight at one of our Great Homeschool Conventions. There, you’ll hear from a great variety of featured speakers and have the ability to attend workshops that focus on important topics like these. Sometimes, hearing another person’s “story” about how they overcame certain issues can give you just the push you need to get through your own.

Our seven Great Homeschool Conventions are regional conventions, which means there’s likely to be one near you. Some families travel from out of state, however, and to make it easier for everyone who travels, we offer hotel discounts, military discounts, and free admission to active clergy members. We don’t want anyone to miss out on the opportunity to attend a convention, so feel free to take advantage of these special modifications.