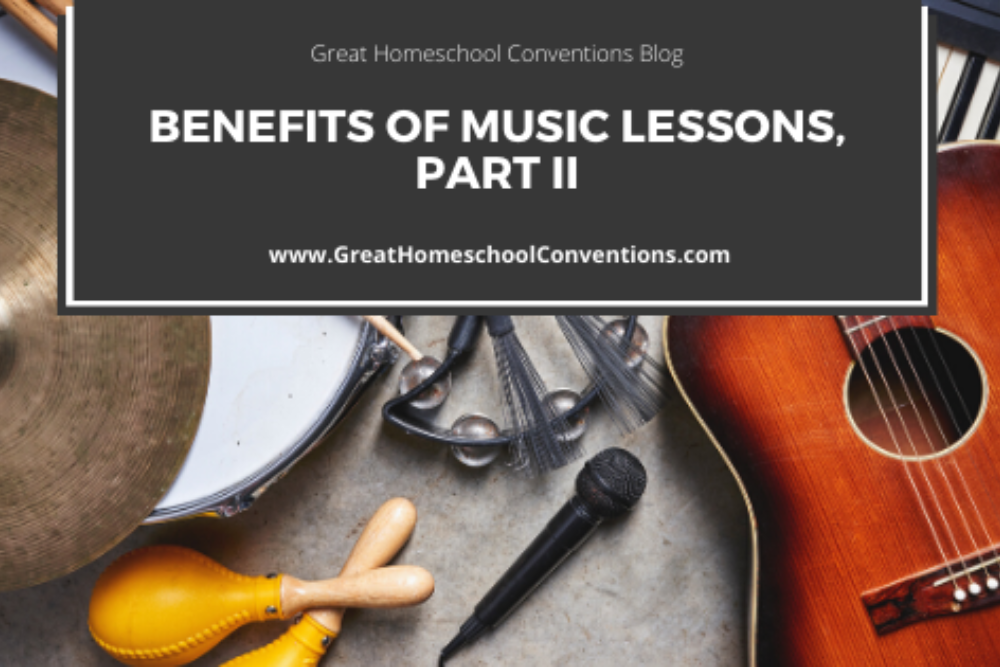 If you do a lot of research about the importance of activities that fully engage the brain and boost intellect with regard to your child’s homeschooling, then you’re going to be interested in this information about the critical importance of music lessons. Consider this study done in 2013 by the German Socio-Economic Panel:

“...the effect of music on cognitive skills is more than twice as large as the effect of sports, an activity which has been found an important input for skill development.” (Source: How learning a musical instrument affects the development of skills, Adrian Hille and Jurgen Schupp)

As it turns out, from a scientific standpoint, the neurological advantages that come with music lessons are simply astounding. This makes them not only worthwhile but absolutely necessary if we are truly and fully to equip our children for the world ahead. Yes, they can certainly “get by” without them, but if we know this information and do not act on it, we are withholding great things from them.

Since every child should have an ample opportunity for the very best from every aspect of life, here are a few of those benefits for your review.

Mathematical reasoning is prevalent in music, from the intervals and key arrangements to the timing and rhythm. You won’t be surprised to find that your child scores higher in math after taking a few music lessons. The reason behind this is that music improves the abstract spatial-temporal skills in your young musician. The same skills are also found in things such as engineering, art, computer-related work, and gaming. As your child considers various occupational pursuits, he/she will realize a benefit from having studied a musical instrument, music scores, and music theory.

The ability to process pitch - something that is learned during music lessons - can also be strongly linked to the ability to process language. In fact, specific gains can be noted in the working auditory memory, the ability to learn patterns in sound, phonological interpretation, rhythm perception, speech in noise perception and even dyslexia. Children who get lessons in both reading as well as music almost always fare better than those whose instruction combines reading with such stimulations as painting or art. Those students learn to express themselves much more comfortably and vividly.

Music Lessons Aid in the Learning of New Languages

Just as music instruction can help with reading and vocabulary, that training in pitch, tone, and rhythm can also provide a boost in learning a new language at any age. Music lessons can also aid in the understanding of grammar and the expansion of complex vocabularies. Music instruction also appears to enhance ono’s IQ by teaching them how better to function in a given discipline. Obviously, these related skills extend to such disciplines as linguistics. Once acquired and pursued, they can last a lifetime.

Aging Can Happen Slower for Those Trained in Music

With aging, a certain decline in cognitive function may come also. Research has shown that music is a great way to combat the progression of dementia and other age-related neurological behaviors. Furthermore, if a person finally stops playing music in their golden years, they can still manage to name objects and have a faster mental processing speed than those who never learned music. The catch is, that most musicians who experienced these great benefits have played for more than ten years of their lives. If that’s not a good reason to keep up with those music lessons, I don’t know what is!

Another problem that comes with aging is the progressive lack of peripheral hearing. Since training in music allows you to become a far more sensitive listener, you can actually isolate specific voices, much like being able to isolate specific musical tones. This helps with hearing, especially if the background noise rises.

No matter what instrument is chosen for music lessons, there is always a certain level of dexterity learned with regard to the accuracy of notes played. The motor cortex, which is trained in the ongoing process of music study, is then practiced extensively and that branches out into many other activities that are not even related to music. According to Neuroscience News:

“A study published in the Journal of Neuroscience suggests that musical training before the age of seven has a significant effect on the development of the brain, showing that those who began early had stronger connections between motor regions, the parts of the brain that help you plan and carry out movements.” Source: Neuroscience News

Movement training can even be based on the foundation received from the connectivity that occurs in the corpus callosum with music lessons. That means any hobby, sport, or occupation that centers around any kind of coordinated movement can be highly impacted by learning to play an instrument.

Children who take more than three years of training in music tend to have much higher levels of self-confidence and self-esteem than those who have no training at all. Additionally, those that practice on a regular, weekly basis scored even higher in these areas than those who only play “from time to time” which indicates the vast difference regular playing can have on the brain on this emotional level. Since it’s a fact that children develop in both academic and non-academic platforms better with music lessons, we can accurately deduce that music lessons are very beneficial beyond simply learning a musical instrument itself.

Many people already know that musicians can often play according to their emotional state. Some play a sad song as if they, themselves, are the heartbroken ones, while others can play a rageful-sounding song with intense emotional accuracy. Studies have found that the area of the brain that handles aggression, depression, and attention-deficit difficulties is thickened tremendously (a good thing) in musicians ranging in age from six years to eighteen years.

One study from the University of Vermont College of Medicine even states that musical ability can even become a critical component in the psychological health of children. It’s no wonder then that music is often used as a therapeutic intervention for many children having problems with emotional processing.

It doesn’t take long to do some basic Google study to find out the intricacies of musical study and what it can do for children. Here are a few quotes (and their sources) so you can read for yourself the outstanding possibilities that come with this most critical element of learning.

“Students who participate in school band or orchestra have the lowest levels of current and lifelong use of alcohol, tobacco and illicit drugs among any group in our society. Concurrent. Res. 266, United States House of Representatives, June 13, 2000”

As parents, we all want to make sure our children do well in their studies, but that they also grow up to be stable, well-balanced young people who are ready to take on whatever life throws at them. When we read facts like this, that speak to the protection music instruction can provide from things like drugs and alcohol, it gives us an even greater sense of urgency that this is a critical aspect of our children’s education.

“Arts involvement teaches children many skills necessary to succeed in life, including problem solving and decision making, building self-confidence and self-discipline, the ability to imagine what might be and to accept responsibility for it, teamwork, the development of informed perception, and articulating a vision. Music for All Foundation - compiled from various research documents and reports.”

In the world we live in today, benefits like these are not often found. From self-confidence and self-discipline to the ability to take responsibility for one’s actions, this is definitely a critical element for today’s youth!

Aside from the atrocity that IS Common Core mathematics, many children truly struggle in math. Since music, as an art form as well as an intellectual practice, can make math much easier to comprehend, starting music lessons at an early age is much preferred over waiting until, say, the middle or high school years to begin. After years of study, the potential in this area alone makes it well worth the effort.

The critical nature of music lessons for your homeschool should now be much more obvious, and you can learn even more when you visit a Great Homeschool Convention. There, you’ll have access to a wide number of featured speakers, workshops, and homeschooling families who already know the importance of music lessons, all for you to learn and glean from. Taking in information is one thing, but when you can sit and listen to those who have already been through it, or experienced major gains from music instruction, it’s much easier to grasp a real-world understanding of its importance.

Our seven regional Great Homeschool Conventions are held in locations across the U.S. One of them should be near enough that you can visit with no problem. In fact, to make it easier for those that have to travel, we offer hotel discounts, military discounts, and free admission for active members of the clergy.